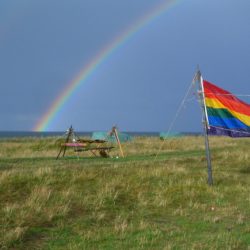 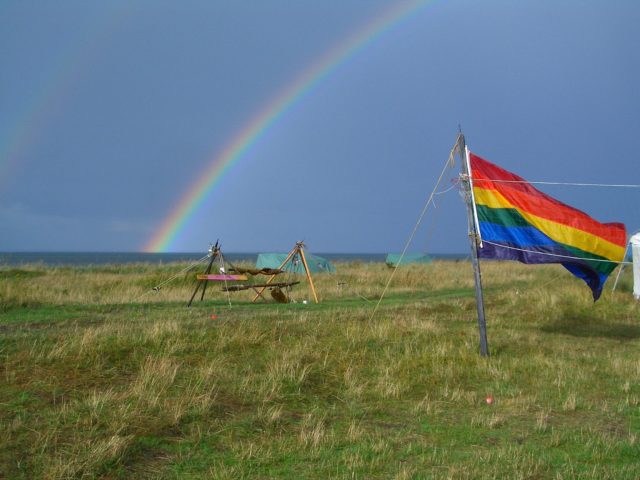 Nahas’s Fight for LGBT Refugees: Making History at the UN and at the NYC Pride

After fleeing Syria, Nahas made history by becoming the first person to address the UN Security Council on the persecution of LGBT people under ISIS and a grand marshal of the 2016’s 46th NYC Pride March [story by D. Agren].

Originally from Idlib, a city of 1.5 million residents north of Damascus, Nahas had feared he would be murdered by ISIS for being gay.

He had grown up being teased and bullied for his perceived effeminacy. His family didn’t accept him. He says that, although the Western media is focused on ISIS’s brutal atrocities against gay men—or men it accuses of being gay—even before ISIS’s terrible barbarism, the Syrian government persecuted LGBT people.

In 2012, Nahas became a target. “Soldiers stopped the bus I was riding to university,” he told the UN. “They took us to a secluded house where they assaulted us. They noticed my effeminacy and they mocked me, calling me faggot, sissy, and other profanities unworthy of this chamber.

“I feared that one of them—or all of them—would rape and kill me. You see, those who condemn us for being different are often the ones who brutalize us sexually. Miraculously, I was released.”

Next, he began to be aware of ISIS’s anti-gay murders, which the group has proudly publicized to the West.

“At the executions, hundreds of townspeople, including children, cheered jubilantly as at a wedding,” Nahas said. “If a victim did not die after being hurled off a building, the townspeople stoned him to death. This was to be my fate, too. I was terrified to go out. Nor was my home safe, as my father, who suspiciously monitored my every move, had learned I was gay. I bear a scar on my chin as a token of his rage.”

In 2012, Nahas escaped to Lebanon, and then to Hatay in Turkey, where he worked as an interpreter.

“Death threats followed me to Turkey,” Nahas told the UN. A former school friend from Idlib named Khalil had joined ISIS. “He relayed through a mutual friend that he wanted to kill me, aiming to go to paradise. He then called me from inside Turkey threatening that ‘I would see his face soon.’

“I was terrified. [ISIS] operatives circulated freely where I lived, and it was only a matter of time before I would be found and killed.”

Finally, just over a year ago, Nahas was granted asylum in the United States, and today he lives in San Francisco, where he first worked for the LGBT refugee organization he helped co-found, the Organization for Refuge, Asylum, and Migration (ORAM).

Now Nahas is setting up his own organization, Spectra.

“Facing all that, where you’re persecuted, illegal, when you’re not allowed to do anything, you’re nothing…To be here, to cross this huge distance to come here, and lead New York Pride—I can’t describe it with words.”

At the beginning of the parade Nahas was introduced to Mayor Bill de Blasio and some members of Congress, and then he had to wait for the march to begin.

“I didn’t know what to expect,” he says, smiling. “It was fun. There were a lot of people waving, and I was trying to gauge the crowd. Somebody gave us flags to wave, and flags made everything easier.” He laughs—besides his resolute activism he has a mischievous, quick wit.

“It was fast. The last Pride march took us three or four hours. This was less than an hour, so”—Nahas smiles—“Pride is definitely easier with a car.”

There was, he says, a lot of energy and love. De Blasio wished him a Happy Pride and told him, “We love you, keep going.”

Some people shouted his name, which impressed him, as they also pronounced it correctly.

He says he was too freaked out to calculate the numbers thronging the sidewalks around him, and he tried to respond as best he could to the wall of sound and good will.

“I remembered when I was isolated in a lot of my school time because people did not want to talk to me or be with me. To have people cheering now because I am different, compared to back then, when they were shutting me out because I was different—my brain sometimes cannot comprehend this. It is amazing and, truthfully, my emotions are mixed.”

He wishes his story was told correctly, he says. “I did not escape ISIS in Syria,” he emphasizes. The threat, when it came to him in Turkey, though indirect, meant “I could not take the chance of waiting and one day he could find a way.” He read recently that ISIS had killed two more men suspected of being gay. Does he think, had he stayed, he would have been killed? “It’s highly possible.”

Since moving to the U.S., Nahas has felt safe and accepted, and he wants this for LGBT refugees, hence his founding of Spectra (in Arabic, the equivalent word means “everyone”), which he hopes will provide a safe haven for those like himself, while also being a practical source of help and ultimately encouraging those who seek its services to become LGBT activists, as Nahas has become.

The most recent reports he has heard from LGBT people in Syria are of fear: There is no one for LGBT people to go to, or seek support from. “They are too afraid to tell their stories because ISIS controls everything,” he says. “I was worried my father might give me up to ISIS, and so are they.

“People are escaping families in areas not controlled by ISIS. Their families persecute gay men before ISIS does, and then families say, ‘Our gay child has brought us shame, so we should give them to ISIS.’ You hear lot of this.”

Spectra will focus on helping LGBT refugees in Turkey from countries including Syria, Iraq, Afghanistan, Iran, Pakistan, and Kazakhstan. Nahas has already surveyed 90 such refugees in a survey, finding that most need urgent legal advice. “There is a tremendous pressure, a need, to do something,” he says.

Just because it has been a few months since we have seen images of men being thrown from buildings, we should not think that ISIS’s vicious and relentless persecution of gay men has abated, says Nahas.

“ISIS will not stop. In their eyes, we are the reason the war is happening, we are the bad things in the universe,” he says. “Whether there is publicity or not, they are still killing us. LGBTs in Syria have no community, no support, they live in the shadows, hiding if they are lucky enough to hide. If you cannot hide, if your behavior gives you away, as it were, it is a disaster.”

Nahas has also received stories—which The Daily Beast has reported before—of ISIS commanders using young boys as sex slaves, an abusive power dynamic with long roots in Islamic history. “They believe any man has right to sleep with a young boy. These boys are categorized by if they have a smooth face, or slightly scruffy bearded face. They are categorized according to their sexual use. They are kept for pleasure—after all, they cannot get pregnant—and girls are kept for conceiving children.”

The boys prized in these scenarios are effeminate; the men being killed by being thrown off roofs and the like are seen as “masculine,” says Nahas.

Nahas has lived in San Francisco for a year. “I don’t find it easy being a public figure,” he says. “I don’t like the exposure at all. But no one else is prepared to do the work I am, and I feel I have to help, I feel like I have to do it.”

Was he always a rebel? “Yes,” he says, smiling. “I was always asking why I was being told to do something. I used to think, ‘Why am I wrong to like other boys? Why do they hate me? Let’s do something about this.’ Of course, I was not able to back then.”

Nahas’s father and he have not spoken for ages, and although he told his mother what he was coming to New York to do this weekend, “she said it sounded cool, but what did he mean exactly.”

“We need to tell the Middle Eastern community that LGBT was not invented by the West. Look at our history. To deny that, to deny people access to basic rights and believe it’s OK, is not acceptable. We need to tell them that basic human rights are not something to give, they are something we are entitled to have—and we will fight for them and we will get them, whether you give them to us or not.”

Nahas concedes that “I would be being optimistic” if he thought that LGBT equality would come to Syria in his lifetime, “but look at the States. In the 1950s, the thought was that we were diseased, not humans, not equal. Now, 50 years later…”

Alongside his brave political fighting, Nahas has also struggled with the sudden liberation afforded to him. “A lot of things have happened to me. I needed to process a lot of things. I couldn’t just throw myself out there because I had lived my entire life up to that point lying to myself and others. I talk in a certain way, but could I now, or would I be judged? It’s a long process, but I hope the effects of persecution will go away in the end. Living in a place like San Francisco, or New York City, helps enormously.”

To LGBT Syrians, trapped, afraid, or in even direr straits, he says: “They should feel not alone. They should feel supported. We are working on things that will hopefully impact their lives and change them for the better. I will always work for them.”