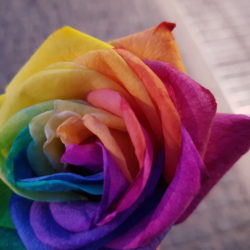 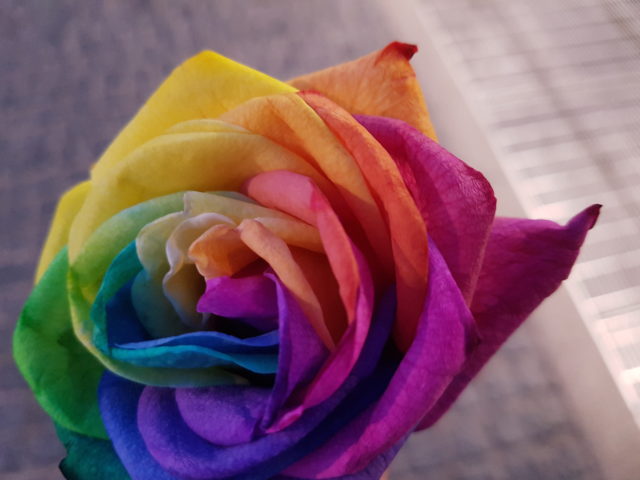 Fear and hope: A gay asylum seeker from Saudi Arabia

Abdullah went from having everything paid for by his family to living out of a bag. And yet he has never felt more at peace. Story collected by Jesse Feith for the Montreal Gazette.

He sits nervously in an office chair, wringing his hands while crossing and uncrossing his legs. He’s wearing a winter coat and gloves two strangers gave him. He has not slept in days. A small bag of his belongings, or at least the few he managed to take before fleeing, rests next to him.

His eyes are fixed on a small white frame on the bank manager’s desk before him. A friend had sent him a similar photo before: a picture of the pink balloons floating above Ste-Catherine St. in Montreal’s Gay Village.

Abdullah […], 19, has come to the bank with the hope of opening a new account to eventually deposit a social assistance cheque. But first he needs to answer a few questions.

[He] opens a folder he’s been carrying around everywhere he goes, removes a plastic sleeve from a piece of paper and slides it across the desk. “REFUGEE PROTECTION CLAIMANT DOCUMENT,” it says across the top, beneath the Canadian coat of arms.

“And do you have an address?”

“Where do you live right now?”

“Um,” [He] stammers again. “At, like, a shelter. Youth and refugee shelter. Near the métro.”

“How long have you been in Canada?”

[Abdullah] is from Saudi Arabia. Openly gay, he has renounced Islam and says he’s been disowned by his family. He’s applying for asylum in Canada on the basis that he fears for his life if he were to return to his home country.

In the wake of several high-profile asylum claims from Saudi Arabia, he’s been using social media to try to share his story, amplify his calls for safety and connect with others in similarly vulnerable situations.

It could take up to 24 months — the current projected wait time as of Jan. 1 — before [he] has his hearing with the Immigration and Refugee Board, which will ultimately decide his fate. And with no guarantees he’ll be granted asylum in the end, he’ll be living in a difficult state of limbo until then.

As his meeting at the bank wraps up, [Abdullah] thanks the manager for his time and help.

“Welcome to Canada,” he’s told as he leaves the office.

As a young boy growing up in Saudi Arabia, [Abdullah] would lock himself in his room, close his eyes and pray he wasn’t gay.

He says he always knew he was, but after repeatedly being told it was unacceptable in school  —  “it’s a shame, it’s a guilt, it’s haram” he remembers teachers preaching  —  he tried to wish it away, reasoning with himself that he was just confused.

In Saudi Arabia, “acts of homosexuality” can be punishable by flogging, imprisonment or death.

[Abdullah] remembers being told he would go to hell if he was gay, but only after authorities dealt with him first. […] Here’s what he says led him to Canada:

As a teenager he began travelling to the United Kingdom in summers to learn English. When he was 15, in Bristol for the summer, he witnessed the local gay pride parade and realized there was an alternative to how he was living.

Two years later, he marched in the gay parade in London. Somehow, he says, photos made it back to his family.

When confronted about it, he lied to his parents and told them he was only supporting the cause. “I promised them, ‘I’m not gay, I’m not any of that, I was just having fun.’”

But it didn’t matter. When he returned to Saudi Arabia, he says he was beaten by his father, who threatened to drag him to the police station. His mother wanted him to undergo conversion therapy. His parents brought in a sheikh to try to get the “demon” out of him.

Last summer, [Abdullah] was sent to Minnesota with his sister to study. Depressed, he says he swallowed 30 anxiety pills in an attempt to end his life.

When he was discharged from the medical centre, he says his sister informed his parents he was gay and had renounced Islam. They cut off financial support, which he feared would lead to his student visa being revoked and his being deported back to Saudi Arabia.

Running out of options, [he] gathered a few key items and headed for the Canadian border.

He took a flight from Minnesota to Detroit, spent a night in the airport, then crossed over into Windsor, where he was detained by Canadian border service agents for two days while they completed his security screening.

Once released, he sold his iPad at a pawn shop to buy a bus ticket to Montreal.

In the afternoon of Jan. 24, [Abdullah], newly arrived in Montreal, opened his Twitter account and posted the following: “I’m gay Saudi refugee in Canada and I’m seeking asylum and I’m in need for help thanks.”

Attached to his post was a link to a since-disabled online crowdfunding page.

In the weeks following the Rahaf Mohammed Alqunun case — the 18-year-old woman who fled Saudi Arabia and garnered international attention by tweeting calls for help from the airport — numerous accounts have appeared online from asylum seekers sharing their stories and asking for help. In Alqunun’s case, Prime Minister Justin Trudeau confirmed Canada was granting her asylum after the United Nations High Commissioner for Refugees requested the country take her in.

But in the maze of social media, it can be hard to tell which accounts are genuine cases and which are not.

[Abdullah] has had to defend himself online, insisting he is, in fact, a real person while asking for support. He’s also received donations and managed to connect with others seeking asylum, including a pair of sisters from Saudi Arabia who’ve been living in Montreal while waiting for their refugee claim to be heard.

He believes his calls for help were amplified when Ensaf Haidar, the activist and wife of imprisoned Saudi blogger Raif Badawi, retweeted his plea to her 74,000 followers.

For Laura Madokoro, a McGill University history professor focused on the history of refugees and human rights, the recent use of social media represents a shift in how people seeking refugee status can now make direct appeals for assistance and get their stories out to the public.

Although it shouldn’t affect individual claims, Madokoro said, public opinion has convinced governments to act on behalf of refugees before.

“It will be interesting to see whether the sense of life in Saudi Arabia and the kinds of persecution people are claiming is validated by public opinion,” Madokoro said. “And does, in fact, change the government’s approach to these cases as well.”

But sharing his story online has also opened [Abdullah] up to the darker corners of the internet. He opens his Twitter application on his phone and starts scrolling through messages he’s received.

“We don’t care if you’re religious or not, you’re going to go to hell,” he reads.

Then another: “We’re so proud to execute LGBTs. Nasty people. Long live the Kingdom of Saudi Arabia.”

[Abdullah] says he’s tried not to let it get to him, but he seems bothered after reading only a handful of messages. “It’s kind of funny, but … it’s kind of scary at the same time,” he says.

He reads one last one.

“I swear to God if you weren’t in Canada I would have found you and I swear to God it would have been the last day of your life,” it says. “I live to kill those who are like you. Because you are a disgrace to this planet.”

In the two weeks since meeting with the bank, [Abdullah] has taken steps toward starting his new life in Montreal. After a week spent in the emergency shelter, he went to the LGBTQ+ centre in the Gay Village and asked for help to find housing.

He was directed toward a Facebook group for LGBTQ+ Montrealers looking for roommates, posted a few lines about his story, and was offered a place to stay in a guest room until he can afford rent.

He has applied for social assistance and will soon be applying for his work permit. For now, he says he’s taking it day by day, focusing on learning French and saving his money for an eventual education. He dreams of studying programming.

He says he has not spoken with his family since fleeing to Canada and does not intend to, though the abrupt separation clearly weighs on him. When a reporter points out he still uses a photo of his sister as his phone’s lock screen, he tears up before saying he doesn’t want to speak about it.

He knew the transition to life in a new country would not be easy.

He went from having everything paid for by his family to living out of a bag. When he walked into the bank, he had $13.75 to his name and $49 due on a phone plan expiring Feb. 18. But at the same time, he says he feels more at peace now than he ever has.

“I don’t have to hide, it was so much weight on my chest and I just took it off,” he says. “I’ve never wanted to be alive as much as I do right now. I feel like I have hope.”