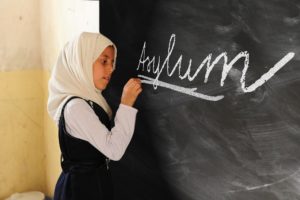 Bright rethoric but a dark reality

I came to Germany in 2013. I was born in Cameroon and after I finished my first Master’s degree, I was working at a newspaper there.

I was while working there that I arranged a date on a online dating site. But the person was an uncover cop and I was arrested and spent two weeks in prison. The commissar asked me to pay him two-million Central-African Francs. I paid him. To be free, I paid him. It was then that I came to Germany.

But by now, I am tired. I told a colleague yesterday that to be gay, black and an asylum seeker in Berlin is to live in a prison.

My studies are now focused on the experiences of black African homosexuals who are asylum seekers in the European Union. Their experience are so different from black, queer people who come here from the United States, who are more respected. If you come from Africa, they think you are sick, come from a poor country and just want a European passport.

In my experience, queer people who come here from Africa need so much, which they are not getting from many organisations here. They need lawyers, social workers and counselling, because they have gone through trauma. We have organisations but they do not understand very well the backgrounds that African queer people come from.

German organisations speak the politically correct language – “this year we supported gay pride in Uganda” or whatever – but the reality is very different.

Also, heterosexuals people from the diaspora are still very homophobic. They live in Europe, but have African views. So queer asylum seekers from Africa are often alone.

African asylum seekers also don’t have job opportunities, because they don’t have the proper documentation, so they have to live on the streets and resort to prostitution. Many have nothing. Nothing.

Black Pride Germany is a project I started in 2016 to improve their lives. I have been getting some support, but mostly a lot of criticism from the larger organisations. For me, I cannot say I am happy in Germany. I have a lot of privilege, yes, but if I take into account the majority of people like me, I feel so bad.