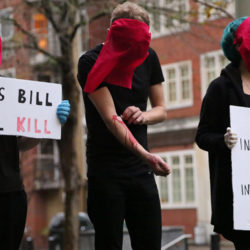 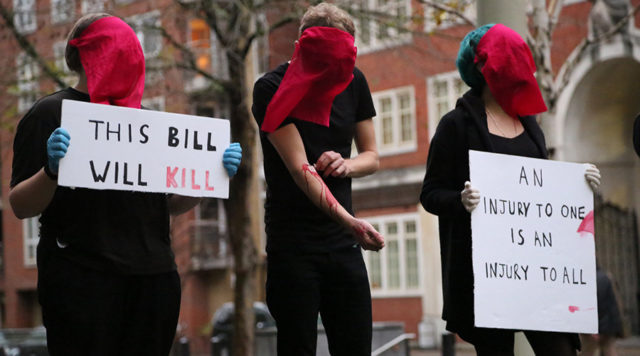 Born in France, raised in Belgium, facing removal to the DRC: David's story

David grew up in Brussels and dreams of a career in fashion, but hardline laws make him an asylum seeker in his own country. His story was collected by Francesca Spinelli for The Guardian.

When David (not his real name) walked into the headquarters of the Belgian immigration department to apply for asylum, he looked at the other people in the queue and thought: “They don’t speak French, they had to flee their country, they have good reason for asking for protection. I’m going to be laughed at.” The officials at the reception desk did not laugh, but they did give him “a weird look”, David says. “When they heard my accent and saw my dyed blond hair, they seemed to think: ‘What are you doing here?’”

David recounts that day last year with a flawless Bruxellois accent. Born on the outskirts of Paris to parents of Congolese descent, he arrived in Belgium when still a toddler. We meet close to where he lives, in Brussels’ university district. His outfit – black ripped skinny jeans, black polo shirt and two white wireless earbuds – is carefully chosen: David, now 22, is set on a career in fashion.

In the same month he applied for asylum, January 2019, Belgium received 2,765 applications, mainly from Palestinians, Afghans and Syrians. Why does David, who grew up in Brussels and has never set foot outside the EU, have to seek international protection in what he feels is his home country? Because he is at serious risk of being deported to the Democratic Republic of the Congo, a country his parents left when they were children, following their own refugee parents.

David’s mother was 17 when he was born. She soon separated from David’s father, who did not recognise David as his son. A few years later she left France for Brussels. The young, single mother entrusted her son to his paternal grandmother. “My mother wanted to live her life, my father was in jail by then,” David says. “But I had a happy childhood. I had a lot of cousins, uncles and aunts, I had my friends in school. I didn’t know anything about my immigration issues.”

Estimates suggest between 100,000 and 150,000 undocumented people live in Belgium. No one seems to know how many of them are children, growing up with limited rights. “They have the right to education,” says Melanie Zonderman from the Platform for Minors in Exile, a network for migrant children’s rights, “and, like undocumented adults, the right to emergency medical services.” That is it.

In Belgium, as in other European countries, the paths to legal status are confusing and difficult to navigate, let alone for a child. They can apply for a humanitarian permit to stay in Belgium under article 9bis of the Belgian aliens act, but whether this is granted or not depends on opaque criteria, which the Belgian immigration department does not make public. The process can take years, costs €358 (£325) for adults (it is free for children), and in the meantime children are at risk of deportation.

David’s situation was complex. His best option seemed to be “family reunification” with a parent living legally in the country. But his mother, who suffered from mental illness and addiction, had not kept up her residence permit. His father, who was released from prison when David was about 10 years old, still had not recognised him as his son.

With David’s 18th birthday approaching, his father finally agreed to a DNA paternity test. When he was 16, David received a five-year permit based on “reunification” with his father. Two years later, he was told there had been a mistake: as the child of a refugee, not a Belgian citizen, he was only eligible for a renewable one-year permit, which would become permanent after five years. David felt the blow, but told himself he just had to hold on for a few more years.

Then he did something that blew it all: he came out. “When my father got out of prison, he soon realised I was not the son he would have wanted,” David said. “I have always been effeminate. He started making comments: ‘Why is he like this, why does he dance like a girl?’ And I thought: ‘I don’t even know you, and you want to change me … I don’t like this.’” During his adolescence David felt as if he had a split personality: “At school I was extrovert, sociable and good-humoured, while at home I was silent, almost embittered.”

One day in January 2018, “I was fighting over the phone with my dad, and I just threw it in his face: ‘By the way, I’m gay!’ He hung up. I started packing my things.” In the following months, David felt relieved. “I started wearing makeup at school,” he says. But then October came, and he had to renew his residence permit. Among the criteria was that David’s father lived with his son and had a stable income. “When the official at the city council asked me for my father’s payslip, I realised my situation,” he says. “I told him I wasn’t even talking to my father.” David became undocumented, again.

He tried applying for a permit under article 9bis, but his pro bono lawyer turned out to be not so pro bono: “He kept asking me for money.” The lack of transparent criteria also made this route risky. He went to France, his country of birth, to see if he could get papers there, but he was not eligible under French nationality laws.

Until recently, a lot of families with children were rejected for asylum, says Selma Benkhelifa, a lawyer and activist from the Progress Lawyers Network. “The minors weren’t even mentioned in these decisions. They were literally treated like part of their parents’ luggage.” So lawyers started filing separate asylum requests for the children, arguing that reintegrating in countries they barely knew, after spending their childhood or adolescence in Belgium, would not only be impossible but would expose them to serious risks.

On Benkhelifa’s advice, David decided to apply for asylum, based on the persecution he would face in the DRC because of his sexuality. Robin Bronlet, a colleague of Benkhelifa’s, is optimistic about David’s case. But he points out the absurdity of the rule by which children inherit the nationality of their parents. “As immigration lawyers, we must identify the risks David would be facing in case of ‘return’ to his ‘country of origin’, meaning the DRC,” he says, “even though David was born in Europe and never set foot in Africa.”

Today, undocumented children are scattered all over Belgium. Some of them make the news when they suddenly disappear from school, are detained and sometimes deported. But most, like David, keep their worries to themselves and blend in with their classmates, hoping for some miraculous solution.

None of David’s closest friends from school know he has lost his residence permit and has applied for asylum. “If I told them, they would worry, and it would be too stressful,” he says, “and I don’t want to be pitied.” Since leaving his grandmother’s house, David has moved around a lot. He stayed with friends and even spent a few nights in a hotel when had nowhere else to go. In September 2019, he moved into a flat with three other gay asylum seekers through Le Refuge, an organisation supporting isolated LGBTQI+ youth.

At the end of 2019, David’s mother was arrested after an identity check and taken to Belgium’s only immigration detention centre for women, in Holsbeek. While he remains estranged from his father and grandmother, his mother has accepted his sexuality. She spent six months in detention before the coronavirus outbreak forced Belgian authorities to release many immigration detainees. David visited her several times. “To me, it was an extension of what I had gone through since entering the asylum system,” he says. “The human side is totally lacking. All they see in you is a sans-papiers.”

David is eagerly awaiting his interview with asylum authorities. “I’m really sick of waiting. I feel stuck,” he says. And yet he is making plans for his future. He wants to start a YouTube channel offering advice on makeup, fashion, wigs and how to “boost the confidence of LGBT young people”. He wants to find a job to save money and enrol in fashion school. “Will the asylum authorities believe me?” he wonders. “I will tell them my truth. If it’s not enough, too bad. If it’s enough, so much the better. I just want to get it over with.”

[written by Francesca Spinelli for The Guardian]