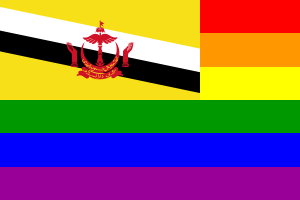 'Looking over each other’s shoulders': The story of a gay man in Brunei

A man reflects on his experiences as a gay man in Brunei before fleeing to Canada to escape sedition charges. Story collected by Calum Stuart for Digital Pride.

‘Despite everything, [Brunei] is a beautiful country,’ Shahiran says, reflecting on the journey he’s been on, culminating with him fleeing his home country of Brunei to seek refuge in Canada.

[…] it was reported that his home country was pushing through with its implementation of the Sharia Penal Code (SPC), a controversial piece of legislation that specifies brutal punishments for declared offenses such as male homosexual sex, apostasy, and adultery. Brunei, usually ignored by the international press, suddenly found itself at the center of the world’s attention. […]

Freedom of expression is lacking in the country, and many LGBTI Bruneians do not speak openly about their experiences. Being outside of the country, Shahiran and a handful of other LGBTI Bruneians living in self-imposed exile formed the minority who were able to speak freely on the topic of homosexuality in Brunei. […]

While the implementation of the SPC has focused the world’s attention on the tiny Southeast Asian nation, the law is essentially the latest manifestation of the stigma and marginalization the Bruneian LGBTI community has experienced for decades.

A former colony, Brunei still retains a sodomy law introduced by the British. Although no one has been convicted under that law, its continued existence helps to legitimize prejudice and discrimination. With highly restricted options to organize and advocate for their rights, the LGBTI Bruneian community has been effectively forced underground.

‘Feelings of loneliness and isolation are commonplace [in Brunei],’ says Matthew Woolfe, founder of the LGBTI rights group The Brunei Project. ‘The lack of information and support services available to LGBTI Bruneians is something that The Brunei Project has been concerned about since its formation.’

‘These feelings can really damage their relationships with their friends and families,’ Woolfe adds. ‘In many instances, LGBTI Bruneians are not out to their families and friends or have only confided in a select few that they know they can trust.  They may feel that there is no one they can turn to for advice or to share their feelings.’

This is the world Shahiran grew up in while trying to come to terms with his sexuality. ‘If I really think about it, I first realized I was gay at six-years-old,’ he says. ‘But I was always in denial.’

He says it was only when he went to study abroad that he had a breakthrough. ‘When I was sent to the UK at 17 I still wouldn’t come out to myself. So when I went to Northern Ireland, to Belfast, to [study] medicine, it took like a year or so before I said to myself “You know what? I like guys!”’

Shahiran moved back to Brunei in his late-20s and found work in the health sector. During his 10 years living in the country he had two serious relationships, neither of which lasted.

Unlike heterosexual relationships, same-sex couples in Brunei face high levels of prejudice and social stigma. This necessitated sneaking around and ‘looking over each other’s shoulders’, trying to hide his relationship from the prying eyes of family and neighbors. The pressure became too much for the Shahiran and his boyfriend, who eventually parted ways.

Shahiran’s next (long-distance) relationship with a man in Malaysia did not come with the same scrutiny, but the distance and prolonged periods apart began to take their toll. As a means to intensify their time together, Shahiran and his boyfriend began indulging in harmful behaviors such as drug abuse and chemsex. ‘It was to numb the pain,’ Shahiran says. ‘Because I was very much in love with him, and couldn’t see him much. And then whenever he was around I wanted to enhance that meeting because we would only see each other once a month.’

‘I think Shahiran’s experience is a pretty accurate reflection of the circumstances facing LGBTI in Brunei and their coping mechanisms for dealing with them,’ says Woolfe.

‘When society shuns you for who you love or because of how you identify as a person and your own government goes so far as to implement laws that effectively say that you deserve to be jailed, tortured or killed for those same reasons, how do you deal with that level of hate and how that makes you feel about yourself, especially when you are feeling so isolated and alone? It pushes people to take extreme measures.

‘I am aware of instances in which this desperation and feelings of loneliness and self-loathing have been major contributors in LGBTI Bruneians turning to illegal substances or attempting suicide.’

Over the years, Shahiran had also built up a small, close-knit group of friends, all of whom were gay. While none expressed their sexualities openly, they became a de-facto support network who could confide in one another, share feelings, and open up in ways they were unable to with to anyone outside of the group.

But everything would soon change.

‘I would’ve been in jail for more than ten years’

One weekend in mid-2017, Shahiran returned to Brunei after a chemsex-filled weekend in Kuala Lumpur. He logged onto Facebook and read news about Brunei’s health ministry announcing that they would be employing staff in all kitchens to ensure food was being prepared in a halal way. The move was rationalized as a way to boost recruitment and ensure food is prepared in accordance with Islamic standards.

Shahiran thought it was ridiculous. He posted a short rant about issues with the move, criticizing the ministry in the process. He then went to sleep; when he woke up, he found that the post had gone viral. It didn’t take long for the authorities to come after him.

Because he had complained about the ministry, state prosecutors claimed that he had posted ‘inflammatory comments’ about the government and their policy and charged him with sedition.

There was more: ‘I was charged with a further three charges under Sharia law,’ he says. ‘If I was found guilty for all of them, including sedition, I would’ve been in jail for more than ten years — over that Facebook post.’

Once slapped with charges, Shahiran’s world began to fall apart.

He says his group of friends steadily began to drop off. He says they ‘didn’t want anything to do’ with him, worrying that the authorities were following him and that they too would come under scrutiny. With the state determined to prosecute, Shahiran’s close friends and support network began to distance themselves from the beleaguered health worker.

He believes that the stakes were higher because they were a group of queer friends. ‘There’s less of a suspicion of each other among straight friends. They can’t betray each other, really — what is there to betray?

‘At the end, there were only two guys left. Even my best friend from the very very beginning disappeared. He was nowhere to be seen.’

Socially isolated, Shahiran fell into self-harming, usually with toenail clippers that left marks he could pass off as careless, accidental cuts. The stress of his trial meant he began lashing out at those closest to him — including the only friends he had left. He also occasionally began binging on methamphetamines to escape the solitude he found himself in.

‘It all went so fast. Because I didn’t have anyone to talk to. I just went in on myself,’ he says. ‘Losing friends… I didn’t want to think about it. I just wanted to get drugs to forget about it. And when I didn’t have drugs, I was just an annoying person to be around.

‘When I was on meth, I couldn’t give a shit about anyone. Because those binges, they were few and far between, but they would last for a week. And I wouldn’t sleep the whole time.’

Eventually, the pressure and paranoia became too much. He fled Brunei by taking an illegal taxi across the border into Sarawak, a region of Borneo under the Federation of Malaysia. He then flew to Kuala Lumpur and holed up in a hotel room.

After a year and a half of non-stop anxiety mixed with self-destructive behavior, Shahiran thought of taking his own life. ‘It’s really hard to talk about,’ he says. ‘I did try to attempt suicide because I’d just had enough.’

He says that his life was saved by a local drug dealer he knew and a friend from Brunei who came to his aid. The two began looking at countries Shahiran could seek asylum in. ‘[They] both kind of nursed me back to health and put me on the first flight to Vancouver,’ he says. He claimed asylum upon arriving in Canada.

A new life outside of Brunei

Living as an asylum seeker in Canada is a tough life. ‘My living situation is much worse in Vancouver than it was in Brunei,’ Shahiran says. He is barely supporting himself, constantly moving from one accommodation to another, often relying on food banks, and sometimes having to go whole days without eating.

But Shahiran also says that he’s found a happiness and a sense of belonging in his new home which he never experienced in Brunei.

‘I don’t scream at night [in my sleep] like I used to. I don’t wake up in a sweat, scared… Here I don’t bite my fingers until they start bleeding. I’ve never felt the need to start hurting myself, or never felt the desire for everything to end. In Brunei it was almost every fucking day — I was like “I wish this shit would end; I wish I would end.”’

He spends his time volunteering and getting to know the place he now calls home. ‘Here it’s such a diverse community,’ he says. ‘There are so many things to do.’ But despite his online bravado and animosity towards the Bruneian authorities, there’s still a part of Shahiran that continues to yearn for his homeland.

‘There’s nothing more majestic than the natural beauty of the rainforest of Brunei,’ Shahiran says. ‘Because they’re ancient rainforests. They’re among the oldest rainforests in the world […] The beaches are the most beautiful I’ve ever seen in almost all of Asia.’

‘That connection to the land that I have, that I will miss the most,’ he continues, his voice wavering. ‘Because I’ll never see that land again.’